The Chairperson of Qatar Foundation for Education, Science and Community Development, Her Highness Sheikha Moza bint Nasser was seen present at the Drones Show displayed at Katara’s Amphitheatre
and held under the festive end of Katara’s National Day Celebrations.

The 8-day National Day Celebrations at the Cultural Village Foundation – Katara came to an end with a grand finale, on Tuesday. The celebrations, which offered something special for every age group, attracted people from all walks of life, including nationals and citizens.

Speaking on the festive conclusion, the General Manager of the Cultural Village Foundation- Katara, H.E. Dr. Khalid bin Ibrahim Al Sulaiti, happily stated; "We have been honoured to witness Her Highness Sheikha Moza bint Nasser attend the conclusion of our activities to mark Qatar's National Day 2017".

The General Manager went on to acknowledge the various segments that took part in Katara's National Day Celebrations and thanked them for their fruitful cooperation which had a great impact on the success of the well-hosted activities.

In addition, Katara's Chief outlined that Katara's celebration this year was exceptional, as the events ran over a period of eight days and saw a huge turnout from the public which confirms Katara's ability to attract the nation with an aim to enrich the local scene with rich national and cultural activities.

The National Ardah dance held at Katara's waterfront, drew in huge crowds who applauded the performers for their patriotism and loyalty to the nation's leadership. Visitors queued up to sign their messages on the Tamim Al Majd wall.

For most families, the musical fountain 'show' – which took place every 20 minutes – was a big attraction. Sailing buffs assembled at Katara's waterfront to receive the Fath Al Khair 3 Dhow. The Fath Al Khair team, comprising of 16 Qatari nationals led by the Captain Mohammed Al Sada, received a tumultuous welcome as crowds received them back from their voyages in the region.

'Qatar is sovereign and will always stand tall' was the underlining theme across the festivities.  Katara's Beach hosted Al 'Gaffal' ceremony, an event that presented national anthems and folk songs from Qatari maritime heritage, sharpening the sense of patriotism and loyalty already riding high amongst the assembled audience.

50 Qatari outlets participated in the daily bazaar held in cooperation with Bedaya Centre, as part of Katara's National Day Celebrations. The outlets displayed products that were rich in Qatari culture, yet intertwined with a touch of modernity.

On the sidelines of the celebrations, an exhibition by the Qatari artist Ahmed Al-Maaded was inaugurated in gallery 2, building 18. Ahmed is a Qatari artist who has gained international recognition for his renowned artwork, including the portrait of the Emir of the State of Qatar, His Highness Sheikh Tamim bin Hamad Al-Thani. The black and white painting depicts a three-fourths profile of the Emir, HH Sheikh Tamim bin Hamad Al Thani, with the Arabic wording, Tamim Al Majd, which means 'Tamim The Glorious'. The portrait itself has become a world-wide phenomenon and can be spotted on all social media platforms.

The Cultural Village continued to host the first-of-its-kind 'drone show'. Also, shows based on the theme of nationalism and loyalty to the country, were regularly held at Katara's Amphitheatre. Sixty paratroopers from Qatar's Joint Special Forces presented spectacular aerial acrobatics between 3:30pm and 5pm each day, at Katara's waterfront.

Katara delivered to its promise of providing entertainment for every age group. Tiny tots played in the sand by the beach, the elderly listened to the music, while others lined up at the various traditional food kiosks. Many of the visitors, both foreign nationals and residents, expressed their appreciation at the high standard of Qatari cuisine on offer.

The final evening culminated in a riveting fire-works display that set the Cultural Village aglow, in a mosaic of reflected colours. 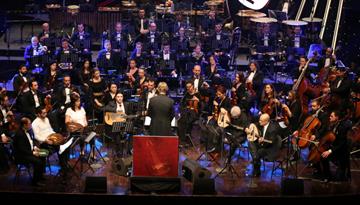 The curtain came down on the first edition of The Fifth String Festival on Tuesday, the 21st of... 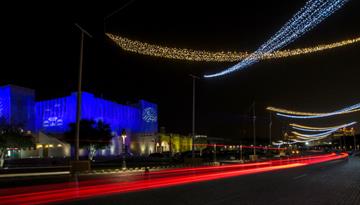 The Cultural Village Foundation-Katara inaugurated Katara’s Ramadan Festival which is...