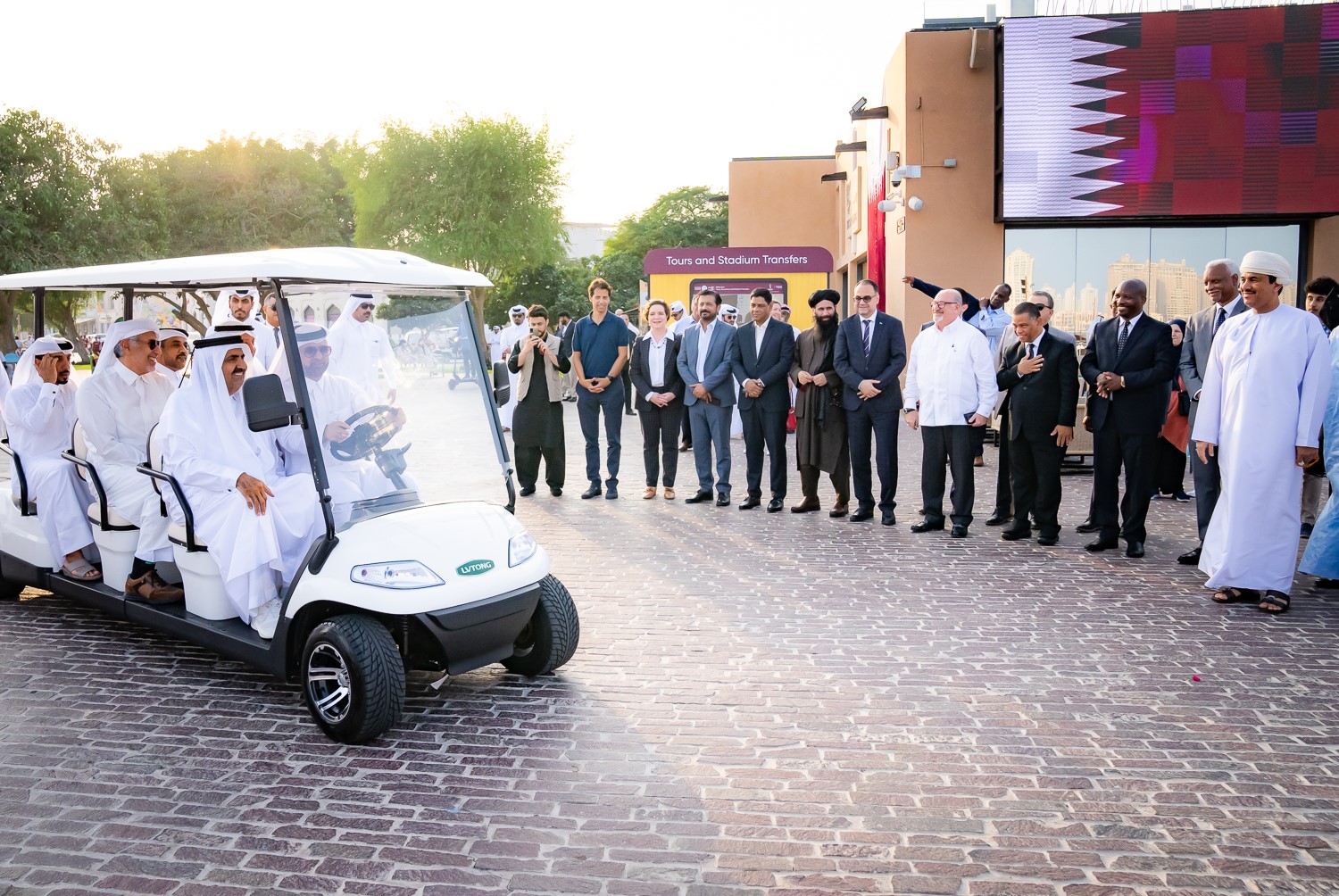 His Highness the Father Amir Sheikh Hamad bin Khalifa Al Thani inaugurated this evening the 12th edition of the distinguished Katara Traditional Dhow Festival, organized by the Cultural Village Foundation – Katara, on the splendid waterfront of Katara Beach.
HH The Father Amir was accompanied by His Excellency Sheikh Hamad bin Jassim bin Jabor Al Thani, Former Prime Minister and former Minister of Foreign Affairs.
His Highness the Father Amir was received by Prof. Khaled bin Ibrahim Al-Sulaiti, Director-General of Cultural Village Foundation - Katara.
HH The Father Amir also flagged off the journey of the flags of the nations of the 32 qualified teams put on greatly preserved heritage dhow boats to sail past the Doha Corniche and Qatar’s world famous Museum of Islamic Art (MIA) on to Doha Port.
HH The Father Amir also toured some of the pavilions of the participating countries. His Highness was briefed on the activities of the festival and its heritage activities, marine competitions and folklore performances.
The grand and hugely popular festival showcases Qatar’s pearl-diving legacy and the rich values of fishing and maritime history - a cultural pride in the hearts of Qataris for several generations.
The festival includes 50 pavilions - including exhibitions of marine heritage collectibles and others for crafts and handicrafts known as 43 handicrafts, and ship building workshops from nine countries: Qatar, Saudi Arabia, Kuwait, Oman, Iraq, Yemen, India, Turkey and Tanzania.
Commenting on the 12th edition of the Katara Traditional Dhow Festival, who also celebrates FIFA World Cup Qatar 2022, and will be open on all days till the Qatar National Day (December 18th), HE Prof Khalid bin Ibrahim Al Sulaiti, Director-General of Cultural Village Foundation, Katara, said, “The 12th edition of Katara Traditional Dhow Festival is exceptional and a landmark occasion since it coincides with Qatar’s historic hosting of FIFA World Cup 2022. The distinctive and celebrated Festival will be a window for all visitors from around the world to learn about Qatar’s and Gulf nations’ strong connection with the sea and the richness of its maritime heritage and history.
“The Festival will further add to extending the bridge of communication between cultures and peoples,” he said.
He added that the Festival, as its audience was accustomed to, through its various sections, seeks to present various details that would enrich a visitor's knowledge about life in the ancient times in the Gulf countries in general. In addition, it will help revive traditional marine sports through various competitions that have been inspired by the heritage of our ancestors and their voyage into the sea while seeking livelihood for many decades.
On its opening day, the Katara Traditional Dhow Festival witnessed a large audience of different age groups and nationalities, who followed a variety of folkloric paintings presented by a group of young girls, in addition to the performances of the Omani Al-Ardah band and representative paintings inspired by the lives of the people of the sea, such as farewell to the Yazwa and deep sea divers when they started their diving journey represented through songs.
The various sections of the festival extend over the entire Katara beach evoking the ancient form of Al Furjan and offer a variety of traditional products related to traditional crafts and industries associated with the sea.
Prof Al-Sulaiti inaugurates Mexican-Qatari Center
Within the program of its activities accompanying the FIFA World Cup Qatar 2022, His Excellency Dr. Khalid bin Ibrahim Al-Sulaiti, Director-General of the Katara Cultural Village Foundation, inaugurated the Mexican-Qatari Center in the presence of HE Mr. Marcelo Ebrard Casaubon, Minister of Foreign Affairs of the United States of Mexico.
The center includes a health clinic in addition to a security office, passport clearance office and a cultural events office, to cater to Mexican visitors to Qatar supporting the Mexican national football team at the World Cup.
Katara aims to coordinate with various authorities and institutions in the country in everything related to the World Cup, including providing various services needed by the fans who support the participating teams.
Katara also continued to amaze its audience of different ages and nationalities with its various activities accompanying the FIFA World Cup Qatar 2022, where the Thuraya Planetarium received visitors for a second day in a row with five daily shows: Stars, Polaris, Zola, The Universe, The 8 planets on the Milky Way, The perfect planet, and The Dawn of The Space Age.
An exhibition of fine arts, football and collectibles (supervised by the Qatar Photography Center of the Ministry of Culture), attracted a wide audience of those interested in art and football. Algeria, Morocco, Sudan, Qatar and Lebanon are All represented as well - their teams participated in the FIFA Arab Cup, which was held in Doha from November 30 and December 18, 2021.
Qatar’s footballing history has been brought alive in the second hall where drawings of the most important moments and the pictures have been chosen by Rashid Muftah Al-Sulaiti, editor-in-chief of Al-Saqr magazine in the eighties of the last century, and presented to professional artists who have made these paintings.
While a third hall displays sports gear belonging to previous World Cups, which are T-shirts worn by players in previous World Cup tournaments, old publications that covered the World Cup in previous tournaments, as well as medals, footballs and tickets, all of which belong to different historical eras related to the World Cup.
It should be noted that the Katara Cultural Village continues its festive activities on all days accompanying the FIFA World Cup Qatar 2022 until December 18.