At a press conference held at its Amphitheatre, the Cultural Village Foundation-Katara announced that the second edition of the Mahaseel Festival will kick off on Saturday, December 23,
organized in association with the Agricultural Department at the Ministry of Municipality and Environment.

The press conference was held in the presence of the General Manager of the Cultural Village Foundation-Katara, H.E. Dr. Khalid bin Ibrahim Al-Sulaiti and the Head of the Mahaseel Festival Organizing Committee, Mr. Salman Mohammed Al Naimi.

The Mahaseel festival is in line with Katara's focus on promoting solidarity with a number of local institutions and charities, while engaging with the wider community. Through this festival, Katara highlights the role played by the producers and suppliers of both agricultural and livestock-based food in Qatar, as well as providing a platform for new small, medium and large-scale businesses in those respective fields.

The festival will be staged at Katara's Southern Area, from December 23 – 27. From January onwards, it is scheduled to take place every weekend (Thursday, Friday and Saturday) until the end of March 2018.

Speaking on the occasion, the General Manager of the Cultural Village Foundation – Katara, HE Dr. Khalid bin Ibrahim Al-Sulaiti said: "Following the tremendous success of the first edition of Mahaseel Festival, the national recognition it achieved, the positive echoes generated by the activities arranged at Mahaseel, and the excellent quality of live-stock and farm produce that was on display, it is our utmost pleasure to launch the second edition of the Agricultural Festival."

"Katara is keen to launch the festival, as part of its unceasing efforts to support national products in its various sectors, especially in agriculture, livestock and food supplies, more so as it would help the State of Qatar achieve agricultural sustainability and self-sufficiency in food production and distribution."

The Crops Festival is a new venture in the agricultural economy of Qatar, and it offers a unique platform that creates an awareness amongst residents about Qatar's domestic farms and the competitive prices and quality of homegrown produce. The festival also highlights the effective role of Mahaseel as it is held to improve the production rates within agricultural and food sectors, while encouraging farmers to ensure continuous farm produce." Katara's Chief added.

In addition, H.E. Dr. Khalid bin Ibrahim Al Sulaiti stated: "We make every effort to increase public participation and awareness of Qatar's agricultural heritage. Such festivals provide visitors with helpful information on the vast array of food products on offer and their health benefits. In addition, the festival will feature competitions, exhibitions and interactive events to promote public awareness and interest in Qatari food produce."

Outlining the line-up of activities scheduled for the festival, the Head of the Mahaseel Festival Organizing Committee, Mr. Salman Al-Nuami said, "The festival will be staged in the southern part of the Cultural Village, and will host from 22 sales institutes and six farmers, which will offer visitors the best quality of produce including fruits, vegetables, honey, poultry, milk and cheese." 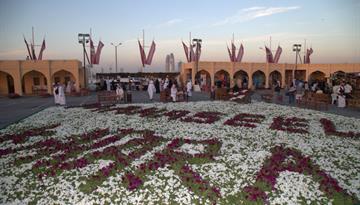 The Cultural Village Foundation- Katara opened the 2nd edition of Mahaseel Festival at its southern façade this Saturday in cooperation...