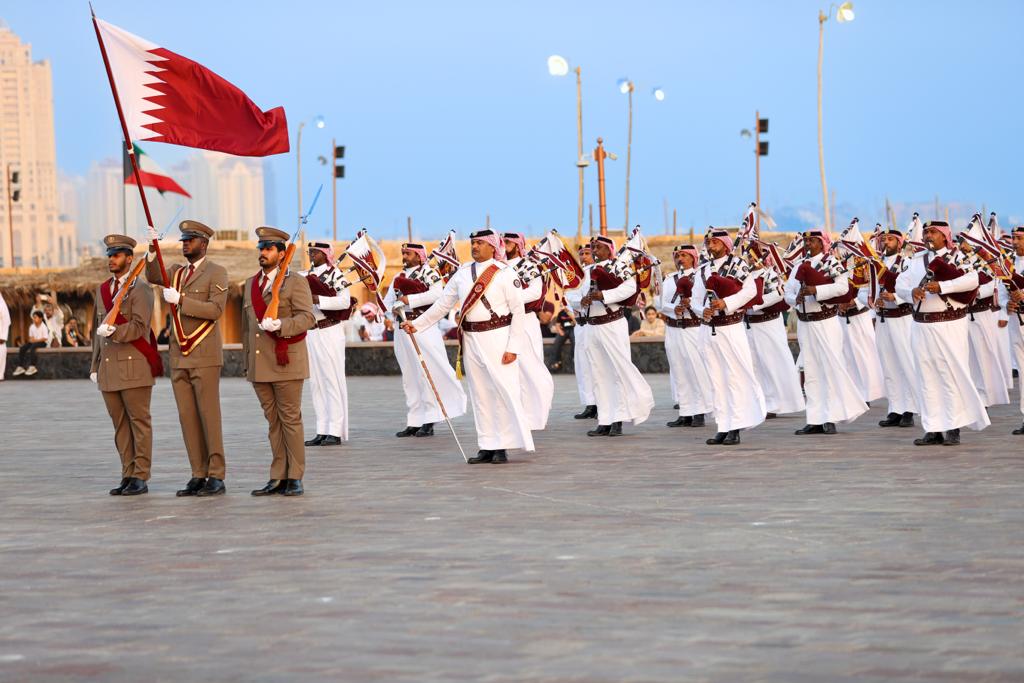 The festivities at Katara, accompanying the FIFA World Cup Qatar 2022, attracted the attention of the World Cup audience, who were keen to visit the Katara Cultural Village Foundation, watch its various activities and learn about Qatari culture, arts and heritage.
The 12th edition of the Katara Traditional Dhow Festival at the splendid Katara Beach promenade, which runs till December 18, witnessed a remarkable turnout with its various pavilions highlighting the ancient culture of marine heritage.
The grand and hugely popular festival which showcases Qatar’s pearl-diving legacy and the rich values of fishing and maritime history attracted audiences interested in the culture and heritage of various nationalities. It won their admiration for its richness and long history and a cultural pride of Qataris for several generations.
The festival includes 50 pavilions - including exhibitions of marine heritage collectibles and others for crafts and handicrafts known as 43 handicrafts, and ship building workshops from nine countries: Qatar, Saudi Arabia, Kuwait, Oman, Iraq, Yemen, India, Turkey and Tanzania.
The pavilions at the festival display ancient crafts of sailors, craft of diving for pearls, the tawasha, the caliphate, and everything related to the manufacture of ships and boats, to fishing tools. In addition to displaying diving equipment, pearl trade, and all the needs of the Nawakhas and Yazwa on their trips and travels for fishing, diving and trade.
Also participating at the Katara Traditional Dhow Festival are a number of heritage museums, such as: "The Museum of the Late Jassim Al Mannai, the Abdul Aziz Al Buhashem Al Sayed Museum, and the Issa Al Mulla Museum."
There are also displays of fishing methods such as Hadra and Kargour, which are semi-circular cages made of palm fronds; Yarouk Mossadeq nets made of yarn, and a one-piece diffar of spinning nets, and Askar.
These museums also display the means of building ships and boats, which provides an opportunity for visitors to learn about the maritime heritage in its smallest details and its various aspects and features.
Meanwhile, on the Ibn Al-Reeb Cultural Street, Katara Handicrafts Exhibition also attracted public interest in collecting souvenirs and handicrafts. The exhibition displays products by artisans from Qatar and the Arab countries. The expo also has handicrafts such as Sadu, hand embroidery, traditional clothes, leather works, art paintings, sand painting, as well as traditional paintings.
The Tunisian Cultural Days will also be continuing its activities till December 18. On Saturday evening, a concert by singers Fadi and Akram at the amphitheater square opposite Building 39 wowed visitors. People also continued to flock to the exhibition of Tunisian handicrafts which is displaying mosaic paintings, marqum (a kind of rugs and carpets), and the famous Tunisian shashia.
As part of Katara's activities accompanying the FIFA World Cup Qatar 2022, the Abdullah Bin Zaid Center of the Ministry of Awqaf and Islamic Affairs held an advocacy film with virtual reality cameras in a theater opposite the Postage Stamp Museum. It shows the eras of pre-Islamic era, before the light of Islam, and mentions a part of the history of the Prophet’s mission. The duration of the film is about seven minutes, and everyone can enjoy watching it.
The Abdullah Bin Zaid Center is distributing books to introduce Islam in many languages, including Spanish, French, Russian, German, Orange, English, Filipino, Urdu, and other languages, and brochures are distributed to teach Arabic to non-native speakers, all for free.
Visitors also watched a special military show presented by the Military Parades Center and the Qatar Armed Forces Music Brigade on the waterfront of Katara Cultural Village, where the audience enjoyed beautiful military displays.
The Katara Cultural Village also recorded the presence of a large audience that came to watch the opening ceremony and the opening match of FIFA World Cup Qatar 2022 on two large screens - the first set up near the sports club, and the second in front of the Sukkar Pasha restaurant.
His Excellency Dr. Khalid bin Ibrahim Al-Sulaiti, Director-General of the Cultural Village Foundation, Katara, received on Saturday, His Excellency Mr. Alfredo Porreiro Vega, Vice President of the Republic of Ecuador, who accompanied him on a tour of Katara’s activities accompanying the World Cup.
The Vice President of Ecuador praised the diversity of events and praised the Katara Traditional Dhow Festival and its various pavilions showcasing the Qatari and Gulf maritime heritage.
The Tunisian Cultural Days event also witnessed the presence of a large audience from the Tunisian community and fans of the Tunisian team participating at the Qatar 2022 World Cup. The event was marked by the visit of His Excellency Mr. Kamal Dokish, Minister of Youth and Sports of Tunisia.
The Katara Publishing House’s outlet situated opposite the open theater witnessed a demand for 22 books related to sports and the World Cup, published specially for the occasion of Qatar’s hosting of the 2022 World Cup.