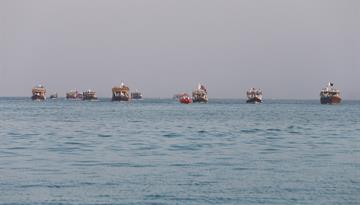 The traditional fishing competition (Hadaq), which is part of the Seventh Senyar Festival will begin at Katara beach early morning tomorrow (Thursday).
Sixty four teams comprising a total of 832 people will set sail in wooden boats for the championship. They will spend two days and nights in the sea fishing from early morning until desk. The competition will close by Saturday noon and the teams will then return with their catch.

A closing ceremony (Ghaffal) will take place at Katara beach at 5pm on Saturday during which the winners will be announced, said Jihad Al Jaida, a member of the organizing committee.

The winning teams will be selected based on the weight of the fish each team has caught.

The participants are allowed to use only the traditional way of handline fishing. Modern fishing tools or nets are not permitted.

Each team comprises 10 to 13 people. For the first time this year, each team is allowed to include four participants from other GCC countries or any other foreign nationals residing in Qatar.

The third and last phase of the Festival, Laffah, another form of traditional fishing will begin next week. The three-week Festival will conclude on April 20 with a traditional fishing competition open to families, being introduced for the first time this year.