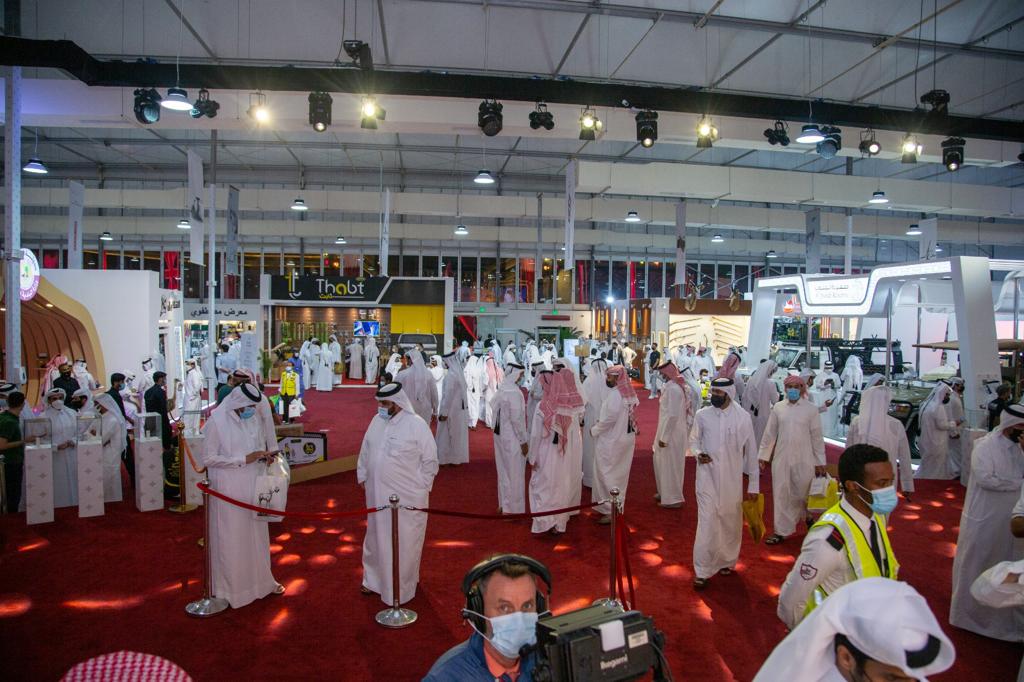 The activities of the S’hail –Katara International Hunting and Falcons Exhibition 2021 -- will come to an end with its fifth edition achieving great success recording huge footfalls and trade volume.
Established in 2017, S’hail which excels at attracting the best of falcons, falconry and hunting-related things from weapons to camping gear to vehicles, this year attracted more than 160 local, Arab and international companies from 18 countries reflected in 152 pavilions of the exhibition expanse running into various sections and halls.
The buzzing activity on all days affirmed the leadership position of S’hail as being largest exhibition of its kind in Qatar, the region and the world. It contributes to preserving the heritage and culture of hunting and falcons that occupies a great place among the people of Qatar, region and the world.
S’hail also recorded daily visits of a number of Their Excellencies, Sheikhs and Ambassadors.
On Friday, HE Dr. M. Mustafa Göksu, Ambassador of the Republic of Turkey to Qatar; HE Cheick Ahmed Tidiany Diakite, Ambassador of Mali to Qatar; and HE Francois Guillaume, Ambassador of the Republic of Haiti to Qatar, graced the exhibition by their presence.
Ms. Malika Mohammad Al-Sharim, Director of the New Media Department at Katara, and Executive Member of the S’hail Higher Organizing Committee, expressed her happiness at the good success of the fifth edition, represented in the expansion of the allocated space and the new sections that were added to accommodate the increased number of participating entities and companies.
“S’hail has an important economic dimension as it is characterized by the power of purchasing which benefits local companies in particular and opens up an opportunity for them to cooperate with other international companies participating at the exhibition, and at the same time it benefits fishing and hunting enthusiasts, as the exhibition provides a wide variety at reasonable prices,” she said.
Mr. Khalifa bin Sultan Al-Humaidi, Executive Member, S’hail Higher Organizing Committee, and media spokesperson for S’hail - Katara International Hunting & Falcons Exhibition, said: “The auction is the excitement point at the exhibition as it attracts big interest of falcon lovers. This year as many as 500 birds participated with two auctions taking place on each day of the exhibition. While the first auction sees the winner being announced the same day; the second auction is reserved for 22 ‘Saker Wah’ falcons (Mongolian) spread over five days where the highest bid price is announced on the final day of the exhibition.”

Meanwhile, many of the exhibitors also expressed their admiration for the new activities of the fifth edition of exhibition. They praised the distinguished and wonderful level with which S’hail - Katara International Hunting and Falcons Exhibition-- appears every year, whether in terms of good organization and elaborate preparation, or the auction that displays the finest and rarest types of falcons. They also appreciated the wide participation from Gulf countries.
Hashem Al-Sulaili from the State of Kuwait appreciated the modern and high-quality products in addition to the innovations that distinguished the exhibition this year including the auction via electronic application, and the demand, competition and strong excitement among falcon enthusiasts. .
Abdul Aziz Abdul Rahman Al-Shehab, supervisor of Golden Eagle Stores (Qatar), said: “I participate in S’hail exhibition every year because it opens the door for us to present our experiences in the field of camping and excursions, as we contribute in spreading awareness through training programs and workshops for students providing them with guiding films published on the company’s platforms on social media. He praised S'hail for the opportunity to exchange experiences and knowledge between participating parties from different countries, which constitutes a global forum and a cultural and economic platform.
Mohammed Ashour, General Manager of Al Aali Solar Energy and Travel Company, praised the fifth edition of the exhibition, saying: "Our company is keen to participate in this global event that we await every year because it provides a valuable opportunity to present the most innovative new and modern products in the world. In the field of solar energy, we seek through our pavilion to spread awareness guidelines related to the process of energy rationalization, which is part of the Qatar National Vision, in addition to our company’s more than 200 new products of solar energy conversion systems to electricity (220 volts) which are used by camping and trekking enthusiasts.