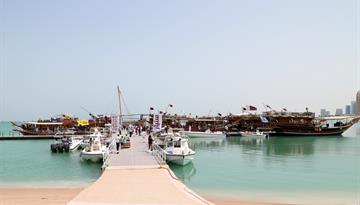 The seventh annual Senyar Festival, being organized by the Katara Cultural Village, had a colorful start at the Katara beach yesterday afternoon.
Some 165 experienced pearl divers, including four children set sail to the deep sea in 15 dhows to take part in the pearl diving championship.

Mood was jubilant at Katara beach as the participating teams arrived with beds and blankets and cartons of food and water to spend two days and nights in the sea. Katara staff and officials were busy making preparations for the championship.

Mohammed Al Hashmi, captain of the team that won first prize last year led the participating teams in their hours-long journey to the sea. Traditionally the leader is called Sardal, captain of the captains

They will be diving in an area in the sea about 40 km away from Katara beach to collect as many shells as possible. The actual competition is scheduled to begin around 7 am on Thursday.

The teams, comprising Qataris and several participants from other GCC states, will return on Friday evening after completing the competition. A closing ceremony will take place at the Katara beach in the evening during which the winners will be announced.

The pearl diving championship is the first part of the three-week long Senyar Festival which will also see competitions in traditional fishing, which will begin next week.

The Festival will conclude on April 20 with traditional fishing competition open to families, being introduced for the first time this year.

The Festival in its seventh year is intended to evoke memories of the past and revive the Qatari traditions associated with the sea.