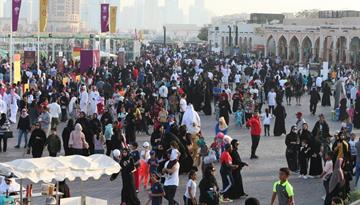 The Qatar National Sports Day festivities kicked off at the Katara Cultural Village on Tuesday with the participation of around 64 entities from private and the public sector.
An array of sports activities in cooperation with the 64 entities, including 11 ministries, 10 sport federations and 24 health and food establishments began at 8am giving a chance to everyone to try different types of sports.

Several officials from different governmental bodies attended the festivities at Katara including HE Saleh bin Mohammed al Nabit, Minister of Development Planning and Statistics, who welcomed the occasion on this special day.

"I am so grateful that we have this annual National Sports Day that we always participate in. Designating a day for sports supports the importance of it nation-wide and the necessity of maintaining it as a lifestyle for a more healthy society, said the Minister.

He also said that spreading the culture of sport among people is a model of a developed society and enhanced awareness can bring more benefits to the country.

HE Ahmad Mohammed al Sada, Deputy Minister at the Ministry of Municipality and Environment (MME) also participated in the Sports Day festivities at Katara.

"Our participation comes in the light of directions of HH Sheikh Tamim bin Hamad al Thani, who has dedicated the second Tuesday of February as National Sports Day", HE said.

The Qatar Armed Forces carried out exercises and activities for the public including those practiced by the military personnel themselves in a more simplified way. Lieutenant Salem al Dosari, supervisor at the venue, said they provide different kinds of sports such as judo where professional trainers from the Armed Forces train people with some simple tactics.

"We also have a shooting range here which witnessed a spectacular turnout, in addition to soccer, basketball, jumping over model barricades and table tennis. The Armed Forces, with their medical services department, also conducted free medical tests for people and gave advice on best healthy practice a person follow and avoid harmful habits," he explained.

Speaking about the occasion, HE Dr Kahled al Sulaity, Katara Cultural Village General Manager said that Katara was always keen on celebrating this special day in cooperation with different ministries and governmental entities to build up a healthy culture in the country.

"The turnout was spectacular today and this enforces the fact that Katara has a special value among people as it is well equipped with facilities and provides enough space for people and the participating entity," he said.

HE Minister of Energy and Industry, Mohammed bin Saleh al Sada, who also attended the festivities of the National Sports Day at Katara said that Qatar has made these initiatives unique.

"Now, it is the 7th edition of the National Sports Day, and it has developed each year and what delights us most is the increasing number of participants each year, besides the diversity of activities we have now", HE explained.

Among the other participants at the festivities was the Qatar General Electricity and Water Corporation (KAHRAMAA) which displayed a whole set of different games and activities for the public under the theme "Let's make balance".

Kahramaa President, HE Hilal al Kuwari who was among other high rank officials at Katara said, "KAHRAMAA is taking part in this delightful occasion, which carries many values and enforces discipline, health, teamwork and the spirit of innovation."

People, who swarmed the Katara esplanade, enjoyed a whole day of fun and sports like beach soccer, beach volleyball, basketball, Zumba dance and many other games and facilities all for free.

Katara provided all necessary support to participants and public including free water and fresh refreshments, healthy food and much more.

A major participant at the venue was the Hamad Medical Corporation (HMC) which introduced its national campaign (Kulluna) which aims at preventing heart diseases and the Qatar Metabolic Institute.

Free medical tests, awareness lectures and healthy practices were all carried out at the HMC pavilion for the public to ensure a culture of healthy habits is in line with sports.

It is noteworthy that National Sports Day in Qatar is considered as a paid holiday.