The inauguration of Melodies at Katara Premises 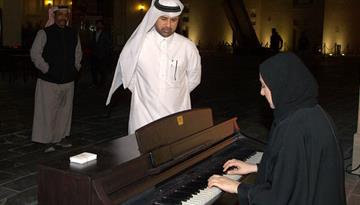 "Melodies at Katara's Premises is an opportunity for participating musicians to exchange experiences, conduct and evaluate live interactions with the audiences. It is also a chance for Katara's visitors to examine new musical talents as they will intend to find a pleasant and a delightful musical ambience." Katara's GM added.

All around Katara's Amphitheatre, twelve musicians were spotted performing on various instruments, such as: the piano, violin, flute, drum, guitar and the oud.

The participant, Fatima Al Mansouri, who is also a student from Qatar Music Academy, said: "Six years ago, I chose to learn the violin and specialize in oriental melodies. Moreover, I'm thrilled to be one of the participants at Melodies at Katara's premises, as it thrives me with live-audience interaction and allows me to experience performing out of the theatre. In addition, I'm also present here today to shed the light on the Qatari musical talents."

As for Hala Al-Emadi, who plays the piano for 10 years, she said; "My passion for the piano arised when my parents gifted me the piano, as I was closely-attached to music and eagerly played music-pieces as soon as I heard the tones. After that I was trained by teachers at home and then began to practice and play with the Qatar Philharmonic Orchestra."

Omar Al Yafei, a music teacher, also plays the guitar, said; "I play many musical instruments but the guitar has a special place in my heart, and I create my own music-pieces that tends to combine the pattern rhythms of samba, salsa and other Latin rhythms."

The event also saw a number of children who performed a joint drum-performances that grabbed the audience's admiration.

It is worth mentioning that the 'Melodies at Katara's Premises' is welcoming any musical talents from all age groups and nationalities until the end of April 2018. Katara's visitors will also be on a date every weekend to witness such enthusiastic talents that are scheduled to perform all around Katara's Amphitheatre.