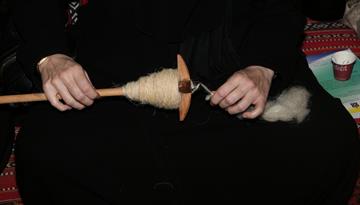 The first training program on traditional handicraft is still carried on in Katara at the square of building (6), as the training courses of Al-Sadu, gypsum decoration and embroidery
will be held between 4 pm and 8 pm on Sundays and Mondays Tuesdays, and will continue until the end of April.

Salma Al Nuaimi, Cultural Counselor and Head of Heritage Committee at Katara Cultural Village, said: "The first training program on traditional handicrafts aims at reviving the popular heritage and attracting Qatari youth, residents and children of Qatar to engage in traditional crafts in order to create a generation of craftsmen aware of the importance of the popular professions and their artistic and creative value, and possess the culture of quality, mastery, excellence".

she also added: "We have divided the craft in terms of practitioners (female and male) and common crafts such as leather tanning, wicker wool, women's crafts such as sewing, al-sadu, perfumery, cosmetics, and men's crafts, such as carpentry, goldsmith, sea craft, gypsum, pottery, blacksmith".
Al-Naimi explained: "The Cultural Village Katara oversees the program and provides all forms of material and moral support to these craftsmen, to practice their traditional crafts permanently to the public through the possibility of allocating various places in Katara, activating tourism and preserving the cultural heritage.