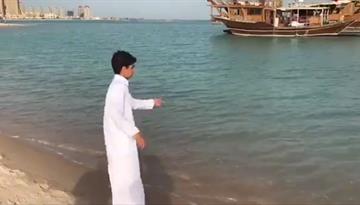 Katara beach witnessed traditional fishing competition (Hadaq) for children, introduced for the first time this year as part of the ongoing Senyar Festival.
Thirty children aged between 10 to 13 years took part in the competition held at the Katara beach in the presence of a large number of people, including families. The event started at 4pm and continued until sunset.

The organizing committee said that the purpose of the competition was to familiarize children with the Qatari marine life and strengthen their bond with the traditions of their fathers and forefathers.

Meanwhile, the Hadaq (traditional fishing championship) for elders, which was part of the Senyar Festival, concluded a Katara beach on Saturday evening with a grand ceremony (Ghaffal) that drew a huge crowd.

The first-prize winning team was awarded a cash prize worth QR400,000, while winners of the second and third positions got  cash prizes worth QR300,000 and QR200,000, respectively.

The traditional fishing competition started on Thursday early morning when 64 teams comprising a total of 832 people set sail in wooden boats. They spent two days and nights in the sea fishing from early morning until sunset. The competition concluded on Saturday noon after which they returned to the Katara beach with the catch.

A number of families gathered at the Katara beach since afternoon on Saturday to receive the participating teams.

Jihad Al Jaida, a member of the organizing committee said that the traditional fishing competition over the years has gained tremendous popularity, reflecting the traditional affinity of the people in Qatar with the sea.